Eating is every Malaysian way of life. Visit any Malaysian home and the first thing the hostess will ask is “Have you eaten?”. This gracious hospitality is ingrained in every Malaysian for generations. For many centuries, Malaysia has been a crossroad for the ancient eastern spice route, and considered a melting pot of Asia blessed with a potpourri of international class cuisine. Therefore, Malaysian cuisine is not one particular distinction of food but a culinary diversity originating from its multi-ethnic communities, from Malay, Chinese, Indian, Peranakan to Eurasian and the indigenous people of Borneo (Sabah and Sarawak). As a predominantly Muslim nation which takes care of the sensitivity of the Muslim citizens and tourists, “Halal” Malaysian cuisines are also served. This diversity makes Malaysia a truly unique food paradise. 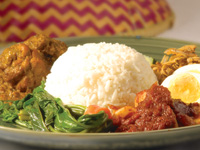 Malay cuisine is characterised by the elaborate use of coconut milk and spices, and differs according to regions. For instance, cuisines from the northern states use tamarind profusely due to the Thai influence while Negeri Sembilan uses “cili padi”, the hottest of all chillies. Overall, Malay dishes are quite spicy and flavourful as in Nasi Kandar, Nasi Lemak, Satay, Beef Rendang, Nasi Kerabu, Ikan Bakar and Sup Kambing. 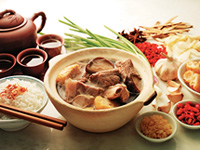 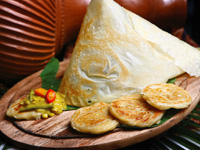 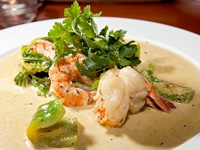 Peranakan cuisine is a unique mix of Chinese and Malay cooking styles originated from the inter-marriage between the Malay and Chinese community centuries ago. The hallmark of this cuisine is the use of spices and pungent roots with typical Chinese ingredients. Among them are Otak-Otak (fish paste), Perut Ikan (fish stomach), Enche Kabin (fried chicken with tangy dip), Jiuhu Char (lettuce wrapped in turnips), Acar (pickled vegetables) and Kiam Chai Boey (salted vegetable soup).

Eurasian cuisine refers to cuisines created from the influence of inter-marriage between the Europeans and the locals here. In Malaysia, the unique cuisine has evolved from a blend of Portuguese colonization of Melaka in the early 16th Century, and later the Dutch and British rule. These dishes may have Portuguese origins as well as absorbed local ingredients like chillies, sambal belacan and pickles (acar). Some were inspired by British and Indian food such as roasts, sweetmeat, patties, spicy Mulligatawny Soup, stews, pies and kedgerees. Among the famous Eurasian dishes are Devil Curry Chicken, Pork Vindaloo, Melaka Black Pepper Crab, Prawn Bostador, Tuna Mornay and Ham Hock Curry. Whatever it is, one thing is certain – Eurasian dishes are not as widely available as other communities but the cuisines are kept alive by individuals. 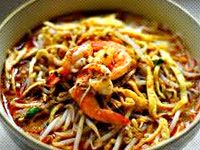 Ethnic Borneo cuisine refers to the food created by the many tribes and indigenous groups of Sabah and Sarawak. Interestingly, they are able to turn wild plants, herbs and fruits into culinary delights. As the states are also decorated with sweeping coastlines and many large rivers, they can create specialities from the abundance of seafood and freshwater fish.  Their famous dishes are Jaruk (Wild boar or fish cooked with rice in bamboo shoots), Hinava (fermented dish of fish, ginger,shallots, chillies cooked in lime juice), Manok Pansoh (chicken, mushrooms, lemongrass and tapioca leave in bamboo shoots), Sarawak Laksa and Kolok Mee. 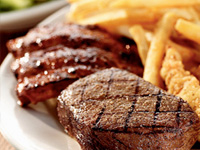 International cuisines include both Asian and Western cuisines. Thai, Japanese, Korean, Indonesian, Vietnamese, Turkish and Arabic dishes can be found in hotels and restaurants. There are also many Western eateries. Whether it is fast-food joint or five-star restaurant, cities in Malaysia serve American, French, Italian, German, Swiss, German, Russian and many more specialities. Expatriate chefs are also brought in to give the food an authentic taste.