An endless celebrations of events, festivals and happenings...

Count down to the fabulous Malaysia Year of Festivals 2015, or MyFEST 2015, as we herald the country's endless celebrations of festivals, events and happenings. Continuing the momentum and efforts of Visit Malaysia Year 2014, MyFEST 2015 is set to make Malaysia the top-of-the-mind tourist destination, encouraging tourists to stay longer in order to enjoy the festival offerings nationwide. 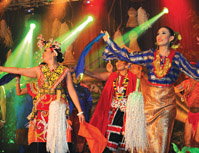 The year 2015 will be known as the Malaysia Year of Festivals (MyFEST) 2015. The MyFEST 2015 campaign will continue to boost the tourism sector and ensure that the Malaysian tourism industry remains robust after the Visit Malaysia Year 2014 campaign. As Malaysia is blessed with various cultures, the new campaign seeks to showcase and celebrate Malaysia's bountiful, diverse cultures and various festivities.

The design for Malaysia Year of Festivals 2015 logo depicts a traditional musical instrument known as the Rebana Ubi. The drum is a musical instrument which can be associated with Malaysia's multicultural society, in line with the spirit of 1Malaysia. Therefore, the logo design reflects an important part of the country's heritage, traditions and culture.