They have huge noses that garner attention. They also have big bellies and live in groups. They are not your ordinary tree swinging monkeys. They don’t eat ripe bananas. And they have webbed feet and swim incredibly! Yes, we are talking about the proboscis monkey, a rare and endangered animal found primarily in Borneo and predominantly in Sabah. 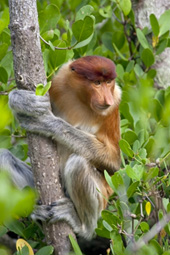 As Malaysia prepares for the hosting of its grandest tourism celebration - Visit Malaysia Year (VMY) in 2014, the country’s commitment to the protection of its ecological treasures and in particular, the conservation of its many indigenous animals provide a platform of opportunity to share with the world its many fascinating creatures that are so often hidden from the general public.

Given also Malaysia’s regional prominence as the guardian of some of Asia’s rarest and most endangered species, the selection of such an animal mascot to symbolically represent the VMY 2014 campaign weighs of utmost importance.

For this, the Ministry of Tourism and Culture, Malaysia has decided upon one of the most endangered of animals listed in the International Union for Conservation of Nature (IUCN)’s Red List of Threatened Species - the Proboscis Monkey as the official mascot for Visit Malaysia Year 2014.

A native to the heartland of Borneo (East Malaysia), this very distinctive species of mammal has some of the most unique qualities that set its biological and physical features apart from other primates. 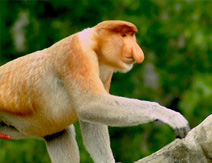 In the past, animals have been used as a mascot for many events organised by the Malaysian Government. The turtle for PATA (Pacific Asia Travel Association) Conference in 1986 and then became the Tourist Development Corporation logo until 1992. It was also used again for PATA Conference 2012. Other animals include the orang utan for VMY 1990; the hornbill for Sarawak tourism events and the mouse deer (kancil) for Sukan Malaysia (SUKMA) 2010.

This time around, a new animal mascot is vital to trigger more excitement and anticipation for VMY 2014. The proboscis monkey, aptly known as long-nosed monkey or “monyet belanda” (Dutch Monkey) is the obvious choice as it best encapsulates all the key essence of a much needed VMY 2014 mascot.

According to YB Dato' Seri Mohamed Nazri bin Abdul Aziz, the Minister of Tourism and Culture Malaysia, “The proboscis monkey mascot resembles everything we want to tell the world – our rich biodiversity, our enchanting wildlife, our environmental conservation efforts and what makes our country unique and fascinating. In short, the natural beauty of Malaysia Truly Asia’s is right here for your discovery during VMY 2014.”

Echoing the sentiments of Malaysia Truly Asia, this elusive monkey belongs to the Asian langurs and is the only member of the Nasalis genus found in Borneo, particularly in Sabah. It is Asian in every sense of the word and a perfect Malaysian host to the world.

As one of Asia’s largest monkey species, they are endowed with some of the most charming jungle skills, from leaping off from tree and into rivers with 3 comical belly flops to incredible dog-paddling swimming aptitude using their partially webbed feet. They are also among the few animals to be able to walk upright at any length of time.

Sounds like a circus show in the jungle? Wait until you see how the mother with infants plunge into the river, and after a few seconds under the water, the infant will clamber up its mother front and over her shoulder to breathe again.

Such amazing spectacle and diverse skills of the proboscis monkey makes it an ideal choice for VMY 2014 mascot and a crowd-puller for eco-adventurers or tourists who want to experience nature this VMY 2014. 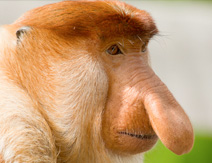 Having a Nose for Success

SIze does matter. The big, fleshy, pendulous nose of the proboscis monkey attracts female mates, amplifying the monkey’s call and intimidating rival males. So having a big nose is an advantage for the male proboscis monkeys which also have a physique twice larger and heavier than the females.

Proboscis monkeys prefer to live in the mixed diterocarp-kerangas forests, mangrove forests and lowland forests near fresh water and rivers. The population of proboscis monkeys is estimated to be 6,000 and most of them are concentrated in Kinabatangan, Sukau, Sandakan, Klias and other parts of Sabah.

VMY 2014 is a perfect time to get up close with proboscis monkeys at the national parks and wildlife sanctuaries such as Bako National Park, Klias National Park, Kulamba Wildlife Reserve, Sungai Samunsam Wildlife Sanctuary and Lubuk Bay Proboscis Monkey Sanctuary.

These places offer nature lovers the most memorable experience of observing the proboscis monkeys. Believe it or not, the graceful leaping of both young and adult monkeys from tree to tree to feed on young leaves, fruits and plants can easily qualify as a perfect ‘10’ if it were an Olympic gymnastic routine! You can also catch them flip and swim, or communicate in a bizarre range of vocal noises, from roars, grunts, squeals to a long nasal honk as a warning sign of predators nearby.

With so many fascinating reasons, it is a fitting tribute to make the proboscis monkey the VMY 2014 mascot to celebrate Malaysia Truly Asia’s nature with the world. What better way to be a perfect host than to show what Mother Nature has to offer in addition to other endless possibilities one can experience in Malaysia, from dazzling parades and processions to colourful cultural shows and exhibitions, fabulous food festivals, exciting sports and adventure, enchanting music and arts festivals, shopping sprees and many more.